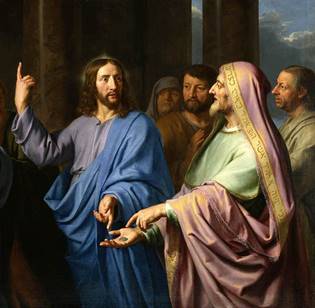 “Repay to Caesar what belongs to Caesar and to God what belongs to God.”  I recall visiting the place where my mother was raised and being excited about visiting family and going to Mass, which was celebrated in a beautiful, tiny little church the size of a small chapel. Upon entering the church, I greeted the community gathered for Mass then took a seat in the rear of the church in order to find a quiet place to pray and prepare for Mass. It was evident by the glances and whispers a discussion was taking place about the stranger among the group. About the one that did not belong. Collectively, they decided to make known the identity of the stranger. They all gathered around me and asked, “Who are you?” I introduced myself indicating I was a seminarian of the Diocese of Orlando visiting my family. It was obvious by the look on their faces that I did not answer their question satisfactorily. Then they said, “No, no, no – who do you belong to?” Well, that is an interesting question. Who do I belong to? Who do you belong to?  To belong implies either an affiliation or membership to a group or to a community like a church or a family.  On the other hand, it can simply imply being owned by a person like a possession or personal property. So, who do you belong to? The members of the church that approached me that day wanted to know who my parents were – what family did I belong to – which family was I a member of. I had a very different perspective of what I perceived they meant by “belonging to.” Initially, as I suspect most people would, I took offense at the question, “Who do I belong to?” because like most, I do not feel like anyone owns me. That has since changed as my relationship with Christ has grown and deepened. I now understand a little more of the depth of God’s love for me and the extent of the sacrifice that was made for me.  I now know that I was purchased at a great price. The cost of my freedom came at the cost of great suffering, persecution and death. Christ died for me so I can belong to God and to his family. Now, I am part of God’s family. I am God’s special possession as scripture says, “they shall be mine, says the Lord of hosts, my own special possession.” So, who do you belong to?